"Turning Out the Light" (sermon)

I lived in Montreal for 4 years while I was doing my undergraduate degree; and during those years I was a Girl Guide leader with a group that met on the edges of downtown Montreal.  Several times a year, we would take the girls camping – usually once in the fall, once in the mid-winter, and again in the spring.  There were a couple of Girl Guide camps north of Montreal in the Laurentians, and that is usually where we would go, heading up on a school bus on Friday afternoon, and returning to the city on Sunday afternoon.

I remember, several times at one of these camps, coming across one of the girls at night, absolutely entranced by the night sky; standing there staring up at the expanse of stars – the Milky Way, the Big Dipper, Cassiopeia – too many stars to be able to name or count.  And what really struck me was that some of these girls had never seen the night sky before.  Since I grew up in the country, in a part of the country that isn’t too different than this corner of the world, the stars had always been part of my life.  I couldn’t imagine reaching 9, 10, 11 years old without seeing the night sky.  But to these girls, growing up in the city with glowing streetlights blocking out any other light source, this sort of night sky was completely new to them.

The light is such a powerful metaphor in our faith.  We talk about the light of Christ; Jesus called himself the Light of the World; scripture tells us that the light shines in the darkness and the darkness can never overcome it; we like to sing,
This little light of mine,
I’m going to let it shine…

But what might we be missing if we only focus on the light?  What might be missing in our lives if we are afraid to go in to the shadowy areas, and instead remain in what author Barbara Brown Taylor refers to as “full solar Christianity”?[1]  Are we missing the awe-inspiring expanse of the night sky?

In today’s scripture story, Jesus ventures into those shadowy places.  He is led into the wilderness, and he fasts there for 40 days.  Now Jesus’ wilderness isn’t the same sort of wilderness that we have here in New Brunswick.  The wilderness that Jesus went in to was a desert wilderness – a brown stony landscape with not much by way of vegetation aside from the occasional oasis; hot and dry during the day with no trees to take shelter under, and so cold at night that the nights are actually more dangerous than the days.

And as he stays there in the wilderness, he begins to see himself clearly, and he begins to see God more clearly.  Today’s story falls immediately after Jesus has been baptized – immediately after he has seen the Holy Spirit descending on him like a dove, and heard the voice of the one whom he calls “Father” call him beloved.  And at the end of the forty days, he is able to articulate his relationship with God when the tempter tries to draw him away, and he is strengthened to begin his ministry in Galilee and beyond.

We, as humans, are very good at distracting ourselves from our spiritual lives.  Or perhaps I should speak only for myself and say that I, as a human, am very good at distracting myself from my spiritual life.  I carry a phone with me everywhere that lets me play games or scroll through Facebook any time I might have the opportunity to just sit and be.  I watch TV on my iPad as I do the dishes, rather than simply being present to myself as I do the dishes.  I listen to the radio or to podcasts as I drive, rather than being alone with my thoughts.

I wonder why we have this tendency to distract ourselves?  What are we afraid that we might find if we were to go into those shadowy places?

And so as we move in to the next 6 weeks of Lent, I encourage you to consider leaving some of these shiny, sparkly distractions behind.  Like Jesus did, venture into the shadowy unknown.  And as you do, ask God to meet you there in the shadows.  Ask God to show you the things that the bright lights might hide.  And prepare yourself to be surprised at the things that you will be able to see; prepare yourself to be overwhelmed by the night sky, once you turn out the lights.

Thanks be to the God who created both light and darkness.  Amen.
[1] Barbara Brown Taylor, Learning to Walk in the Dark (New York: HarperOne, 2014). 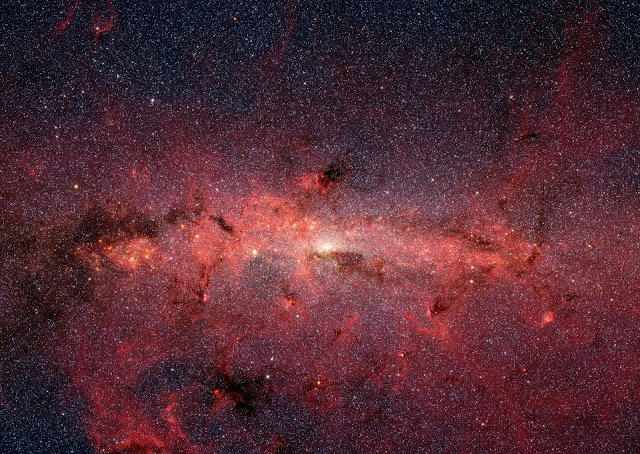 The Center of the Milky Way
© NASA – Public Domain