A Reflection on Church Meetings and Ordinations

Facebook tells me that on this day, 6 years ago, I wrote the following:
“Highlight of the weekend: story-time with the Moderator (i.e. the head) of The United Church of Canada, The Right Rev. Gary Paterson. He read Scaredy Squirrel to us 😀”

For context, I had just driven home from the annual meeting of the Conference of Manitoba and Northwestern Ontario – a gathering of delegates, both clergy and lay, representing United Church of Canada congregations all across Northwestern Ontario and Manitoba that was held that year in Beausejour, Manitoba.  Over the course of the weekend we worshipped together, we heard presentations from our theme speaker, the Right Rev. Gary Paterson, and we went about the work of planning and celebrating the work of the church in our corner of the world – the work or mission of God, as carried out by the Body of Christ, the church.

At that time, I had been wrestling for several years with the sense that I might be called to ministry in the church.  5 months before, I had taken a break from “normal” life to move to a new town for a season, doing the same work but without the distractions of my usual commitments.  Part of the reason for this decision was to have a period of time to discern whether or not God was calling me in this new direction in life.

Part way through the weekend, we were read the story Scaredy Squirrel. 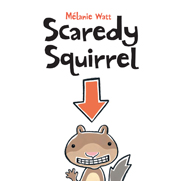 If you aren’t familiar with the book, the message of the book is that life can be scary, and change can be scary, and it’s OK to be scared; but change can also be exciting and can breathe new life.  It was in this moment that I found the courage to make the leap into the unknown, just as Scaredy Squirrel does.  When I got home, I got in contact with my Minister and with the Board of my church and requested a Discernment Committee, the first step (at the time) towards ministry in the United Church of Canada.

On this day, one year ago, I was again at the annual meeting of the Conference of Manitoba and Northwestern Ontario.  It was the eve of my ordination.  I had moved to Halifax and completed my Master of Divinity at the Atlantic School of Theology; I had moved to Chetwynd, in northeastern British Columbia, and completed an 8-month internship; and I had accepted a call to Two Rivers Pastoral Charge in southern New Brunswick.  And I was about to be ordained as a minister in the United Church of Canada.

In our denomination, Ordination happened at the Annual Meeting of Conference – in my Conference, during the closing worship on Sunday morning.  I spent the weekend in Winnipeg at the annual meeting, participating in the worship and work, and reconnecting with old friends.  On Friday, the three of us to be ordained each had to address the gathering, speaking for 4-5 minutes about our ministry, and then the delegates at the meeting voted to ordain each of us.

During the closing worship, the three of us made our Ordination Vows, and then each of us knelt down as the church laid hands on us and conferred the Holy Spirit on us and on our ministry.  It was a day filled with deep joy and awe and celebration and transformation. 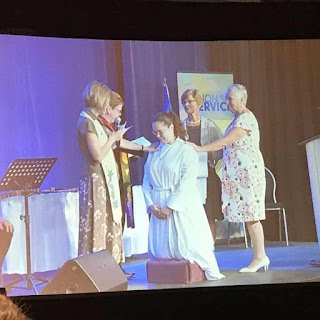 This evening, as I write, I have just returned home from the first annual meeting of the Fundy St. Lawrence Dawning Waters Regional Council.  On January 1, the United Church of Canada changed its structure.  Conferences are no more, and have been replaced with Regions.  Everything has changed, yet everything is the same.

It was a weekend of worshipping together, listening to our theme speakers, and going about the work of the church – working together as the Body of Christ so that God’s mission might be realized in our corner of the world.

And for now, ordination still happens at the closing worship of the Regions.  This morning, I was present in worship as three of my friends (along with three others) were ordained as ministers in the United Church of Canada.  The Holy Spirit was dancing in the arena this morning – it was a day (and weekend) filled with joy and awe and celebration and transformation.  My eyes were leaky at several points over the weekend, and especially this morning.

The church is the Body of Christ.  When we gather together and allow the Holy Spirit to work in us and through us, then transformation happens.  As followers of Jesus Christ, the crucified and resurrected one, we know that resurrection is not only possible but happens.  Even though our old and familiar structures are no more, new structures have arisen and continue to arise and the Body of Christ lives.  The Holy Spirit is still breathing life into us.  The lessons of Scaredy Squirrel still hold true!

How can we keep from singing?!
Posted by Kate at 20:50 No comments:

My oldest nephew is 12 ½ years old now.  When he was born, I was living out of the country, and so I didn’t get to meet him until he was about 6 weeks old.  I remember meeting him for the first time, and holding him, and feeling like my heart was going to explode, it was so filled with love.

When my sister was expecting her second child, 2 years later, I was staying at her house the week of her due date and the week after.  When she went into labour, I stayed back at the house with my almost-2-year-old nephew while my brother-in-law drove my sister to the hospital.  I remember thinking that there was no way in the world that I would be able to love this new baby as much as I had loved the first one.  But later that afternoon, when I took my nephew into the hospital to meet his baby sister, and I held my niece for the first time, it was the same feeling all over again – like my heart was going to explode, there was so much love there.

And the most amazing thing is, that I didn’t love my nephew any less.  Rather than dividing my love between the two of them, the total amount of love that I had was doubled.  And now that I have 5 nieces and nephews – all of whom I got to visit last week – I have 5 times as much love in my heart as I had when the first one was born.  There is just as much love in there for the youngest as there is and always has been for the eldest. 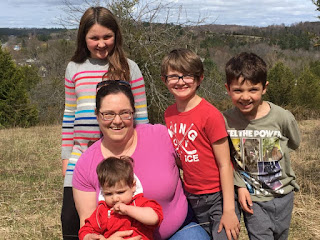 And isn’t that the way with love?  It’s not a zero-sum game, where you have a limited amount of love and you have to decide how you’re going to divide it up, and how much to give to whom.  No – love is something that is gradually unfolding and expanding; always increasing; always being known in more and more ways.

And I think that it’s the same with God’s love, with the love that is God.  Just because God loves another person doesn’t mean that there is less love for me.  I think that the history of the universe is a history of God’s love always unfolding and expanding and being made known in more and more ways.

In our scripture story, the story of Peter is a good example.  What do we know about Peter?

In all of the time that Peter and the other disciples spent with Jesus, they heard his message of expansive love again and again.  Jesus spent time with people who were normally excluded by society – tax collectors, lepers, Samaritans – and he saw that Jesus’ love reached even to them.  Peter heard Jesus’ final plea, on the last night of his life, shortly before he was arrested, that they were to love one another.  This final plea that we heard at our Maundy Thursday service, and that we read again this morning in John’s gospel.  In the final moments of Jesus’ life, this message of love was what he wanted to leave his disciples with.  Love was all that mattered in this moment.

The story that we read today from the book of Acts takes place in the future.  Jesus has died on the cross; Jesus has been resurrected and interacted with the disciples; Jesus was raised up to heaven 40 days later; the disciples received the Holy Spirit at Pentecost, 10 days after that.  And then the disciples were left trying to figure out how they were going to live their lives as followers of this Jesus, the Messiah, even though they could no longer see him.  How were they going to continue to make this expansive and expanding love known to the world?

Spoiler alert – because the Holy Spirit was involved, this message of love spread like wildfire!

The earliest church was centered in Jerusalem, the same place where Jesus had died, had been buried, had risen from the dead, and later had ascended into heaven.  From there, the disciples shared the message of Jesus, and we have stories in the book of Acts of thousands of people being baptized in a single day.

And as soon as he wakes up from his dream, the message from God is put to the test.  Peter is called to a non-Jewish home where the men weren’t circumcised and where the dietary laws weren’t followed.  He is invited to preach, which he does; and as he is preaching, he watches the Holy Spirit descend on to all the people gathered there.  And then Peter baptizes the whole household.  No call for circumcision; no instructions on how to follow the Jewish dietary laws – only a call for the water of baptism.  And as he is reporting back to the other disciples, he says, “God was there.  God gave the gift of the Holy Spirit.  Who am I to stand in the way?”

God’s love was unfolding and expanding in that moment.  Peter’s understanding of God’s love grew that day.  God’s love isn’t just for the “in-crowd” – it is for everyone.

It’s a tough question to ask ourselves.  I may have just revealed what my answer would be in the list I gave above.  We are so good at dividing the world into “us” and “them” whether it is by dietary laws or by political parties or by religion.

But this God who is love keeps on pushing us, prodding us, nudging us by the Holy Spirit to increase our understanding of love, to grow in how we know God’s love, to have our eyes open to the ever-unfolding, ever-expanding nature of God’s love.