One more book review before I head overseas!  I finished this book last night, though it took me many months to get through.  I cared so much about the characters, and there was so much tragedy in the pages of this book, and I found myself reluctant at times to pick it up as I didn't want anything else bad to happen to the characters.

This book is set in the Indigenous community of Winnipeg, and the city is almost another character in the book with it's quirks and geography underlying everything that happens.  It is also a story of families and how the lives of the families intersect with one another.  There is a family tree in the front of the book, and I found myself referring to it frequently, even in the closing chapters of the book.

One of the characters, a semi-outsider who is Métis but also a police officer, sums up the book in one sentence towards the end.  "All these women holding each other up."  This is very much a book about the bonds between women - family bonds and bonds of friendship and bonds of community.  When a young girl is raped in the opening pages of the book, the women rally around her, and "hold each other up."  Men come and go in their lives (though even when they go, they tend to remain connected), but it is the women that are the living core of the family and the community.

This was a heartbreaking book to read, in its realistic depiction of the poverty and violence and addictions that are found in too many Canadian Indigenous communities.  There are gangs, there is violence against women, there are missing and murdered Indigenous women.  And yet the book ends on a hopeful note - at least for most of the characters.

This is book 15/13 for the Canadian Book Challenge hosted by The Book Mine Set.

This is the last book I have to review to catch up to my current reading, and another volume of poetry.

Disclaimer - this was written by one of my professors.  Or, now that I have graduated, I should probably say one of my former professors.  Though when I read it, she was still my professor.  Which brings up the question - how can I objectively review a book written by someone who is grading my essays?

Fortunately, I enjoyed this book.  (If I hadn't, I probably wouldn't be reviewing it on a public forum!)  I found it as compelling as a novel to read - I would be reading it at bedtime and think to myself, "just one more poem," which would inevitably become many more poems.  My first time through, I read the whole book over the course of two or three evenings, and as soon as I finished it, I turned back to the first page in order to re-read it.

What caught my attention with this book was the emotion captured both in the words and between the words.  The poems tend towards autobiographical, with the author capturing her family story as well as her Frisian heritage.

Take, for example, these tragic lines from "Paperpants"

Distress: the long aftermath
of a death, wishing
dead the undead parent,
wishing alive the dead
parent, the rages of an
infernal father hiding
love under piles of bones...


Or, from the central poem in the collection, "Leeuwarden Train Station"

After a week away, in the hall with a suitcase, my cat greets me with
a trill; I hold her close and kiss her.  I do not do this instinctively with
family.


Though I found the overall tone to be melancholy, there was an overall movement towards hope and forgiveness and moving on.  Each word felt very precisely chosen so that each poem packed a big emotional punch despite appearing spare on the page.

I have heard that Alyda Faber (I feel like I should still be calling her Dr. Faber!) is working on another collection, and I look forward to reading it when it is published.

This is book 14/13 for the Canadian Book Challenge hosted by The Book Mine Set.

I have mentioned before that I find it challenging to review poetry books.  I don't know enough about poetry to be able to write an insightful analysis.  I can tell you if I like something or if I don't, but I can't necessarily tell you why.  That being said, I have read more poetry this year than is my wont.

There is a fun story to how I acquired this book.  I was visiting McNally Robinson bookstore in Winnipeg a couple of summers ago and was amazed at the selection of books.  There was not only a poetry section, but a Canadian poetry section.  And so I had to celebrate this fact by buying a book, and this was the one that I chose.  Unfortunately it took me a couple of years before picking it up to read.

I did like this book.  I read it over the course of several months, beginning at an Advent retreat last November.  It was the perfect book to bring to that retreat.  The poems are short and they tend to present a vivid image.  I was sitting by a window in the Maritime Museum of the Atlantic overlooking the Halifax Harbour; and the understanding was that if you were out of the conference room, you didn't want to talk.  I read a poem, then pondered it while looking out at the rainy day outside.

My favourite poem in the collection, one that I have shared with several of my friends, is "A New Religion," and it begins:

If I were called in
to construct a new religion
I should make use of cats.

Several would have fur
between their toes - Maine Coons perhaps -
so they could re-enact the miracle
and walk on snow
without falling through...


Theology and cats - what could be more perfect?!

This was a quiet, gentle, and occasionally delightful collection.  Nothing too earth-shattering, but I enjoyed it enough that when I saw another collection of Lorna Crozier's poetry in a used book store, I didn't hesitate to buy it.

This is book 13/13 for the Canadian Book Challenge hosted by The Book Mine Set.

I've been participating in the Canadian Book Challenge hosted by The Book Mine Set.  I was pretty good up until Christmas at getting my reviews posted in a reasonably timely manner, but I've slipped since then.  I'm still reading - I just haven't posted any reviews.  The only way that this is going to happen is if I start lumping books together and write mini-reviews.  I will cover the Canadian novels I've read since Christmas in this post, and write about the poetry books tomorrow.

I read this book back in February (I finished it on Reading Week while visiting a friend).  It first caught my attention last year when it was one of the contenders for the Canada Reads competition, and even though it was eliminated early, it caught my attention.  It is the story of two sisters dealing with tragedy - their father dies when they are young, and their mother dies a few years later.  The older sister, Beena, seeks affection wherever she can find it and becomes pregnant at age 15, while the younger sister, Sadhana, develops a severe eating disorder at the age of 13.  One of the most striking images in this book is of Beena getting bigger and bigger with her pregnancy while Sadhana is fading away.

The book jumps back and forth between the present when Beena is coping with the unexpected death of Sadhana as well as a moody 17-year old son, and the past as Beena and Sadhana are trying to navigate their life as orphans.  This style worked for me.  The story wasn't just presented as a straight-forward narrative - instead, I was engaged with the characters, and interested in how they would grow and develop.  I ended up reading this book in just a couple of sittings, inhaling large chunks of it all at once.  In the three months since I finished it, the characters have stayed with me - I really cared about what happened to these sisters who were suddenly set adrift.  The emotions felt real to me.

And now for the not-so-good.  The best way I can describe this book is unmemorable.  Mary lives with her mother and grandmother, has a boyfriend renting the apartment upstairs, and has a cousin and aunt and uncle in very different circumstances.  Mary tries to be the person who holds the dysfunctional family together, but her mother and grandmother keep sliding further and further into squalor while her cousin's rich family falls apart from not being able to communicate.  Talk about clichés!

I was frustrated because Mary didn't seem to grow at all during this book.  The family seems to resolve a bunch of issues over the course of the year, but Mary doesn't seem to learn anything - she just escapes the chaos and continues to float through life.  I also found the writing to be flat - it didn't capture my imagination.

The one fun part of the book is that it is set in Nova Scotia (the province where I am currently living).  The family lives just outside of Sydney which I am not very familiar with, but they make a trip into Halifax and I was able to recognize some of the places mentioned.  The local references resonated as well - Mary works in the local Sobey's, for example.

I used to read Kathy Reichs' books faithfully, as soon as they were released, but the past several years I've fallen behind with the series.  But when I was in a used bookstore back in April, I found the next book in the series for a couple of dollars and decided to pick it up.  I'm glad I did - I flew through this book on the long weekend last month.

I've commented in the past that I've found this series to be quite uneven.  The books were really good early on, then deteriorated to the point that I almost gave up on the series, but then started to improve again.  Fortunately this book has continued the trend, and I found it to be as good as her best books.

I'm not going to spoil the mystery, but I will comment that this book acts as a sequel to her earlier book, Monday Mourning.  I barely remembered the plot of the earlier book - I might have enjoyed this book more if I had recently re-read the earlier book, but I was still able to follow along without too much difficulty as the relevant plot points of Monday Mourning were revealed in this book, usually in the form of characters bringing other characters up to speed.  I did guess the "who" of the mystery, and part of the "why," but not the "how."  I didn't want to put this book down; it kept me up a bit too late for a couple of nights in a row - #baddecisionsbookclub - and it gave me the slight anxiety in the pit of my stomach and sitting on the edge of my seat that I look for in a good mystery.  I don't do horror, I don't do paranormal, I don't do terror, but I do enjoy a good mystery!


And if I've done my math right, this brings me up to 12/13 books read and reviewed for the Canadian Book Challenge! 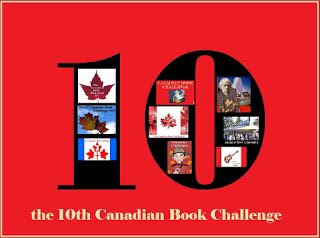