How many of you have siblings, brothers and/or sisters?  If you do, what I’m about to tell you will make a lot more sense!  I have two sisters and we are all very close in age.  When we were growing up, the most common thing heard around our house was, “That’s not fair!” to which our father would reply, “Well, life’s not fair.”  I remember especially the times when there was a treat to be shared between us – say, for example, a cinnamon bun.  One of us would be given the task of dividing the cinnamon bun into thirds, but the deal was, whoever divided up the cinnamon bun got last pick of which third she wanted.  Let me tell you, the division was so mathematically precise that there were often rulers involved!  Whoever was doing the cutting was so concerned that she herself would get her fair share of the treat.

If my sisters and I had read the parable that Jesus tells his followers in today’s reading from Matthew’s gospel, we probably would have had a similar reaction to the workers who worked all day long – “That’s not fair!”  I mean, how fair is it that people who only worked one hour are paid the same as the people who were out working in the field in the heat and the blazing sun for 12 hours.  We would have had a whole lot of sympathy for the workers who complained to the landowner.  Why should the lazy workers who were goofing off for most of the day get as much as the industrious workers?

Some bible commentators suggest that Jesus was telling this parable to point out the injustices of the labour practices of his day.  A denarius, the “usual daily wage” was not very much money.  The day labourers who were paid a denarius for a day’s work were people living on the margins of society.  They had usually fallen on hard times – maybe through debt or a failed crop that meant that they lost their land.  We don’t know today exactly how much a denarius was worth, but it probably was barely enough money to buy enough food to feed a family.  It has been suggested that the day labourers were even worse off than slaves because they weren’t guaranteed consistent work, shelter, or food.  Instead, the day labourers had to hang around the market place in the morning, and hope that someone hired them on for the day.  If a day labourer wasn’t hired for the day, his family wouldn’t get to eat.

And so with this interpretation of the parable, the landowner who pays each labourer, no matter what time they started working at, a denarius, is continuing to perpetuate a system that keeps people in poverty.  It isn’t fair, and it isn’t fair to everyone because no one gets enough money to survive on.  And Jesus, with this parable, is pointing out that this system is wrong.

Even though I agree that it was an unjust system – maybe like the systems in the world today that keep some people in a cycle of poverty – I have a couple of problems with interpreting the parable this way.  First of all, the opening line of the parable is, “For the kingdom of heaven is like…”  A parable denouncing an unjust earthly system doesn’t quite fit an opening that suggests that God’s kingdom is going to be described.

My other problem with interpreting the parable as a denunciation of an unfair labour system is that it doesn’t take into account the verses that bookend the parable.  The very last verse that we read today is, “So the last will be first, and the first will be last”; and if we were to go back to the verse that comes right before our reading, it reads, “But many who are first will be last, and the last will be first.”  It doesn’t happen very often in the bible that you get the same words so close together, but when it does, you can know that it is important for understanding what comes in between them.  And if you take Jesus’ parable as a simple denunciation of the unfair economic practices of his day, you don’t get any reversal with the last being first and the first being last.

But isn’t it human nature though, to complain.  We see other people getting something that we don’t think that they deserve, and we complain about it, even though it doesn’t impact our own lives.  This has been a trend throughout history.  Whenever there has been a movement to bring equality to a group of people that has been oppressed, others have complained about it.  With the rise of feminism, women were given opportunities that had previously been denied to them; and some men complained that they were losing opportunities because of it.  But the thing is, it isn’t a zero-sum game.  When women were given the vote in Canada in 1918, votes weren’t taken away from men in order to give them to women.  Instead, there were more votes in the system to be distributed.  But, in the saying of the well-known theologian, Anonymous that Alison quoted to me the other day, “when you’re accustomed to privilege, equality feels like oppression.”  When you’re accustomed to privilege, equality feels like oppression.

You can see a similar thing happening in the United States and Canada today, with the Black Lives Matter movement.  There are those who say that even the name of this movement is giving extra privileges to one group of people.  But to say this ignores all of the oppression that Black Americans and Canadians have faced over the centuries.  From slavery to Jim Crow laws to internalized and unconscious discrimination to institutionalized poverty and racism – the inequality that began when Europeans first began to travel beyond Europe continues today.  So yes, all lives are important, but it is important to say that Black Lives Matter because these are the lives that have always been considered not to matter.  “When you’re accustomed to privilege, equality feels like oppression.”  “The last shall be first, and the first shall be last.”

Jesus’ parable is a parable about God’s kingdom.  It begins, “For the kingdom of God is like a landowner, who went out early in the morning to hire labourers for his vineyard.”  And I think that if we read this parable, we can see that God isn’t fair.  The workers weren’t rewarded according to what they deserved.  But we can also see that God isn’t unfair, or less than fair either.  The workers who had worked all day weren’t given less than what they had agreed to.  Instead, I would argue that God is more than fair, greater than fair, more generous than fair.  Everyone was given a daily wage.  In God’s kingdom, everyone is given the same welcome, everyone is given the same reward.

If you remember last week’s parable, it tied into the Lord’s Prayer when we pray, “forgive us our trespasses, as we forgive those who trespass against us.”  This week’s parable also ties into the Lord’s Prayer, but this time it is whenever we pray, “Give us this day, our daily bread.”  When we pray the Lord’s Prayer, we aren’t praying for a feast of excess – we are praying for our daily bread.  For what we need today, to keep us going until tomorrow.  A bit like in the Old Testament reading that we read today, where the Israelite people wandering in the desert were given manna and quails – enough food for today, but they were not to keep leftovers for tomorrow.  To quote another well-known theologian, Mick Jagger of the Rolling Stones, “You can’t always get what you want; but if you try some time, you just might find you get what you need.”  In the kingdom of God, according to this parable, we aren’t given what we want – instead, we are given what we need.

You may also note that when we pray the Lord’s Prayer, we don’t pray, “give me this day, my daily bread.”  We are praying for everyone – that everyone in the whole world might have what is needed for this day.  I’m drawing on all sorts of unlikely theologians today – this time it is US comedian Louis CK who said, “the only time you look in your neighbours bowl is to make sure that they have enough – not to make sure that you have as much as they do.”  If the owner of the vineyard in today’s parable had given the workers hired at the end of the day only 1/12th of a daily wage for the one hour that they had worked, maybe the grumblers would have been happy, but someone looking into their bowl would have seen that they didn’t have enough money to buy their daily bread, and that should have been cause for even greater moral outrage.

The good news of the gospel is that God doesn’t work from an attitude of scarcity, but instead from an attitude of abundance.  There is more than enough to go around.  So often in the world, we think that if someone else gets more, then I or we will get less.  But with the kingdom of God, everyone receives the same generous loving grace.  We don’t get what we deserve, or what we earn – thank goodness!  All of us get much, much, much more than that from God.

Let me finish with one more unlikely theologian – Lewis Carroll this time.  One of the books I love is Alice’s Adventures in Wonderland.  It is so delightfully nonsensical and imaginative and fantastical.  At the beginning of the book, Alice falls down a rabbit hole and ends up in Wonderland – a place where anything can happen.  Right away, she ends up growing to more than 9 feet tall, and then shrinking down to a few inches high a couple of times, and then ends up tiny but swimming in a sea of tears that she cried when she was tall, along with a bunch of other small animals and birds.

When they all make it to shore, and are quite wet, they try to figure out how to get dry, and after a few false starts, the Dodo suggests a Caucus Race.  And now, in the words of Lewis Carroll, this is what happened next:

“First it marked out a race-course, in a sort of circle, (‘the exact shape doesn’t matter,’ it said,) and then all the party were placed along the course, here and there.  There was no “one, two, three, and away,’ but they began running when they liked, and left off when they liked, so that it was not easy to know when the race was over.  However, when they had been running half an hour or so, and were quite dry again, the Dodo suddenly called out “The race is over!’ and they all crowded round it, panting, and asking, ‘But who has won?’

“This question the Dodo could not answer without a great deal of thought, and it sat for a long time with one finger pressed upon its forehead (the position in which you usually see Shakespeare, in the pictures of him), while the rest waited in silence.  At last the Dodo said, ‘everybody has won, and all must have prizes.’”

And so I would summarize the parable of Jesus in the words of the Dodo and say, “The kingdom of heaven is like a Caucus Race – everybody wins, and all will have prizes.” 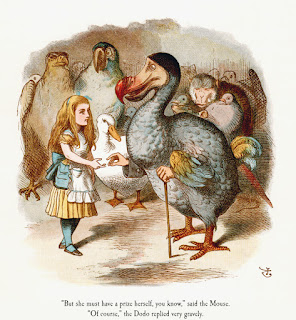 Alice and the Dodo by John Tenniel
Public Domain