Winding down the term...

As I sit here at my computer, the term is winding down.  My last paper is due on April 10 (though I have an internal deadline of the day before since that is the day of my final class).  I still have one essay to finish editing, and two more to write.  The end of this term is feeling much less hectic than the end of last term did - I think that at this point last term, I still had 8 or 9 papers left to go.

I have been struggling with the editing process with the last paper I submitted (last Thursday) and the one that I am editing now.  The one I handed in last Thursday started out at 7 pages and I managed to edit it down to just over 6 - the instructions stated approximately 5 pages, and one of my friends pointed out that 7 is approximately 5 (or at least 7 is closer to 5 than it is to 100!).  The one I am handing in tomorrow is also to be 5 pages - it is a synthesis essay (i.e. synthesize everything that we have covered in this course all term into 5 pages double-spaced), and I am currently sitting at 6 pages with no idea how to cut any more while still answering the questions that I am to answer.  I will go over it a couple more times before bed, and then hit print.

The other two essays that I have to write are both research essays - one for Worship Foundations and one for United Church of Canada Doctrine.  The topics that I picked are both related to Sacramental Theology, so I am able to use some of the same resources for both.  The Worship Foundations one is on ecumenical recognition of baptism; and the Doctrine one will be about the doctrine related to Holy Communion.  I would like to do something around the "open table" concept, but I may not have enough information to write 9-12 pages on just that, so it may end up being just one section of the essay.

And once those are handed in, I will have a couple of weeks off before starting work in May!

(I am not attaching a photo to this blog post - both my desk and my table are covered in books and papers and I am ashamed to take a picture of them.)
Posted by Kate at 20:13 No comments:

Snow and Shovelling and Prayer

Some of you may know that the east coast of Canada has had a difficult winter.  Not quite true - up until the end of January, we had almost no snow.  But since February, we have probably averaged 2 storms per week - some of them just snow, and some of them snow followed by rain followed by a flash freeze leaving lots of ice behind.

This week has been no different.  Between a snow storm last Sunday that dumped 30cm of snow and a second storm on Tuesday night and Wednesday that dumped another 75cm of snow, I have been doing a lot of shovelling.  School was closed for two days (Wednesday and Thursday), and even if I wanted to go anywhere, I couldn't since public transit was shut down for two days and I didn't finish shovelling out the driveway until Friday afternoon.  We are having another storm tonight, and I am praying that most of it falls as rain (the forecast is a bit uncertain - it might be rain or it might be snow or it might be both) since there I have run out of space to shovel the snow to!

Thursday afternoon, I spent a couple of hours outside shovelling snow, and it was a beautiful day.  It was sunny with blue skies, the temperature was hovering right around 0, I had to wear snow pants for wading through the deep snow, but my coat was definitely unzipped.  And as I worked away, one shovelful after another, I was singing Taize chants.

I needed reminding that the snow is a nuisance and nothing worse.

I needed reminding that in the cycle of things, spring will come.

And in the end, I was reminded that "laborare est orare."  (work is prayer)  As I sang, I ended up breathing and swinging the shovel in time with the music.  The shovelling became the prayer.  And it was a good day. 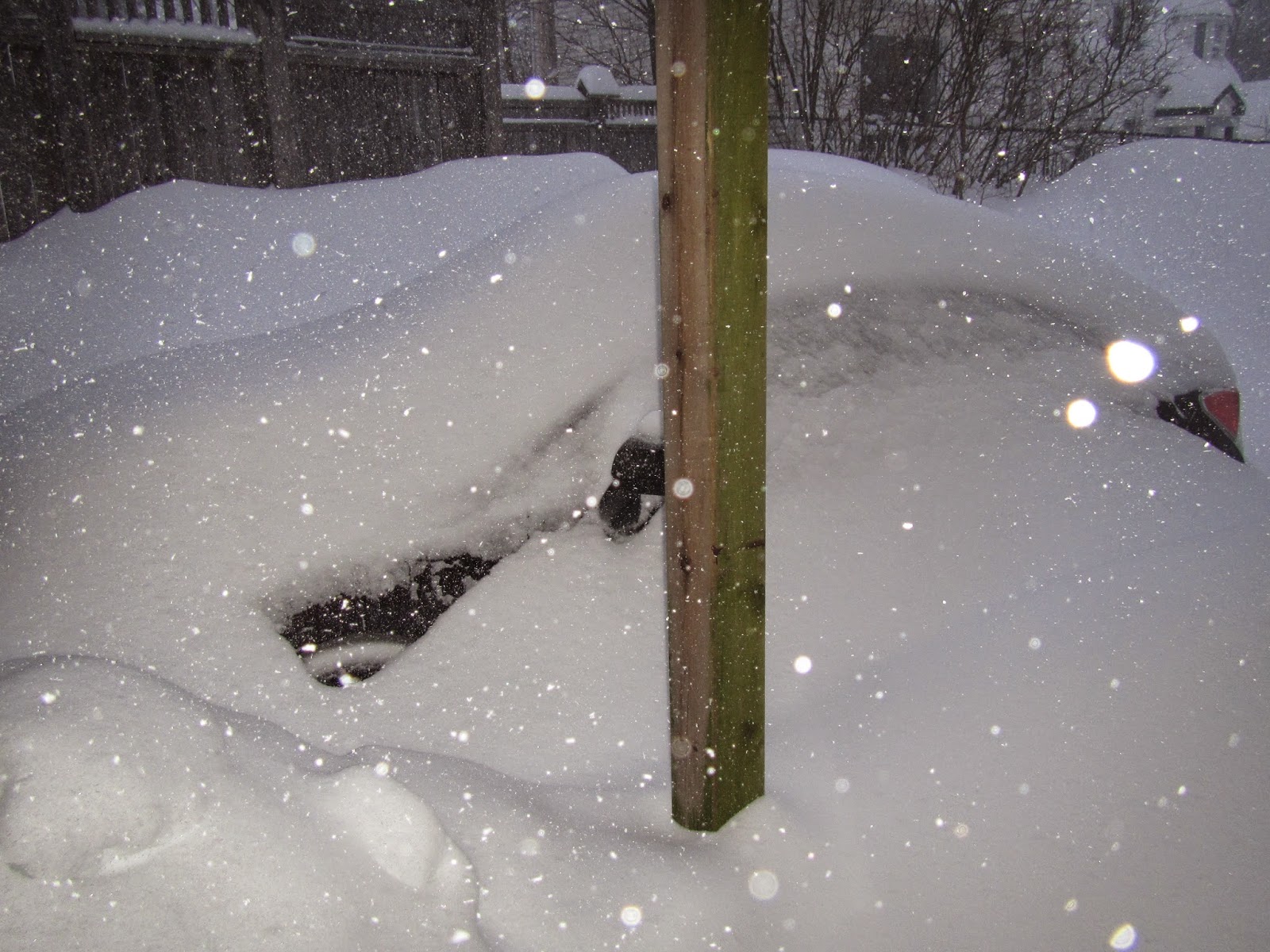 (I know I left a car somewhere out here last night…) 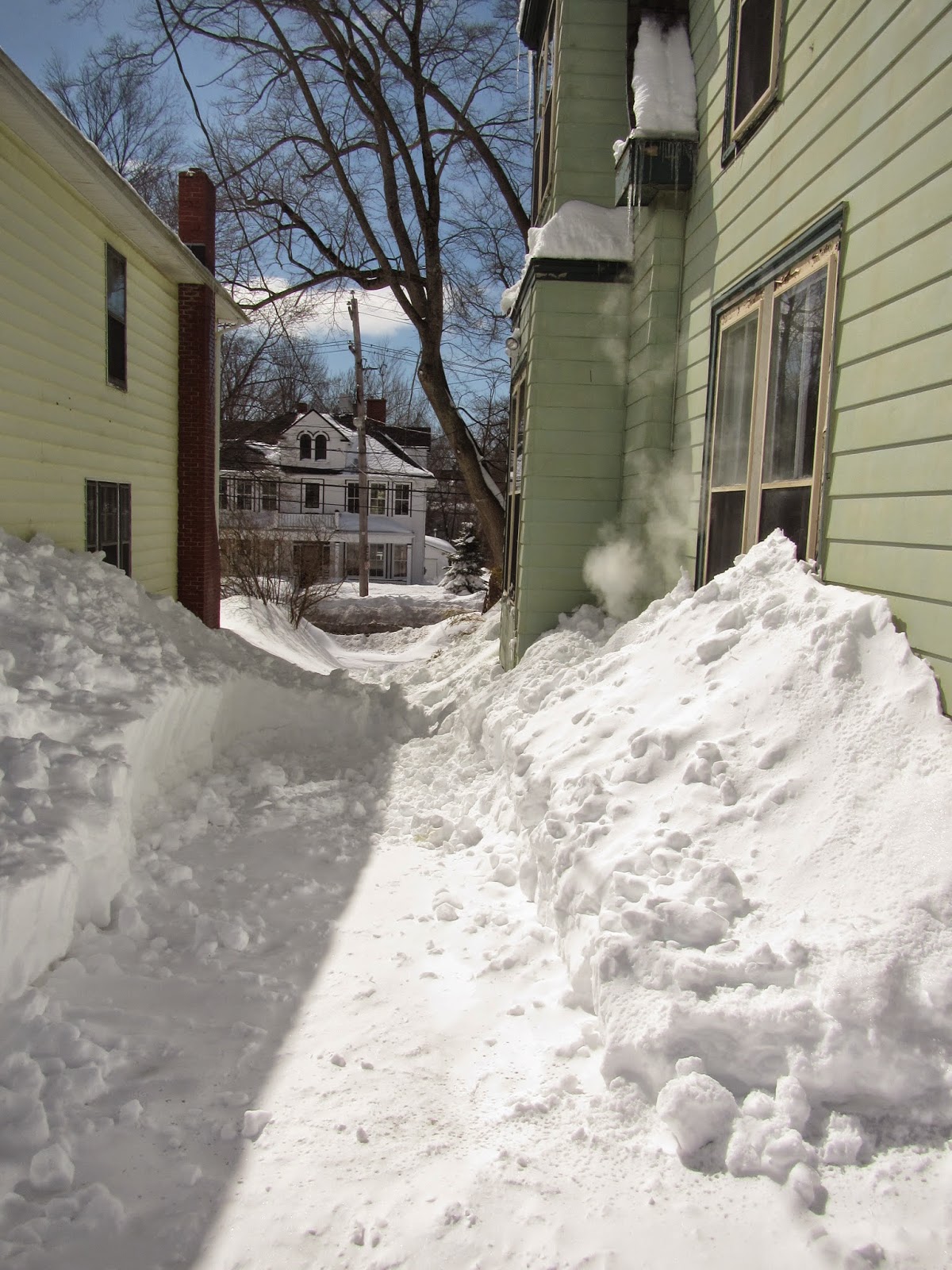 (Looking down the driveway towards the street) 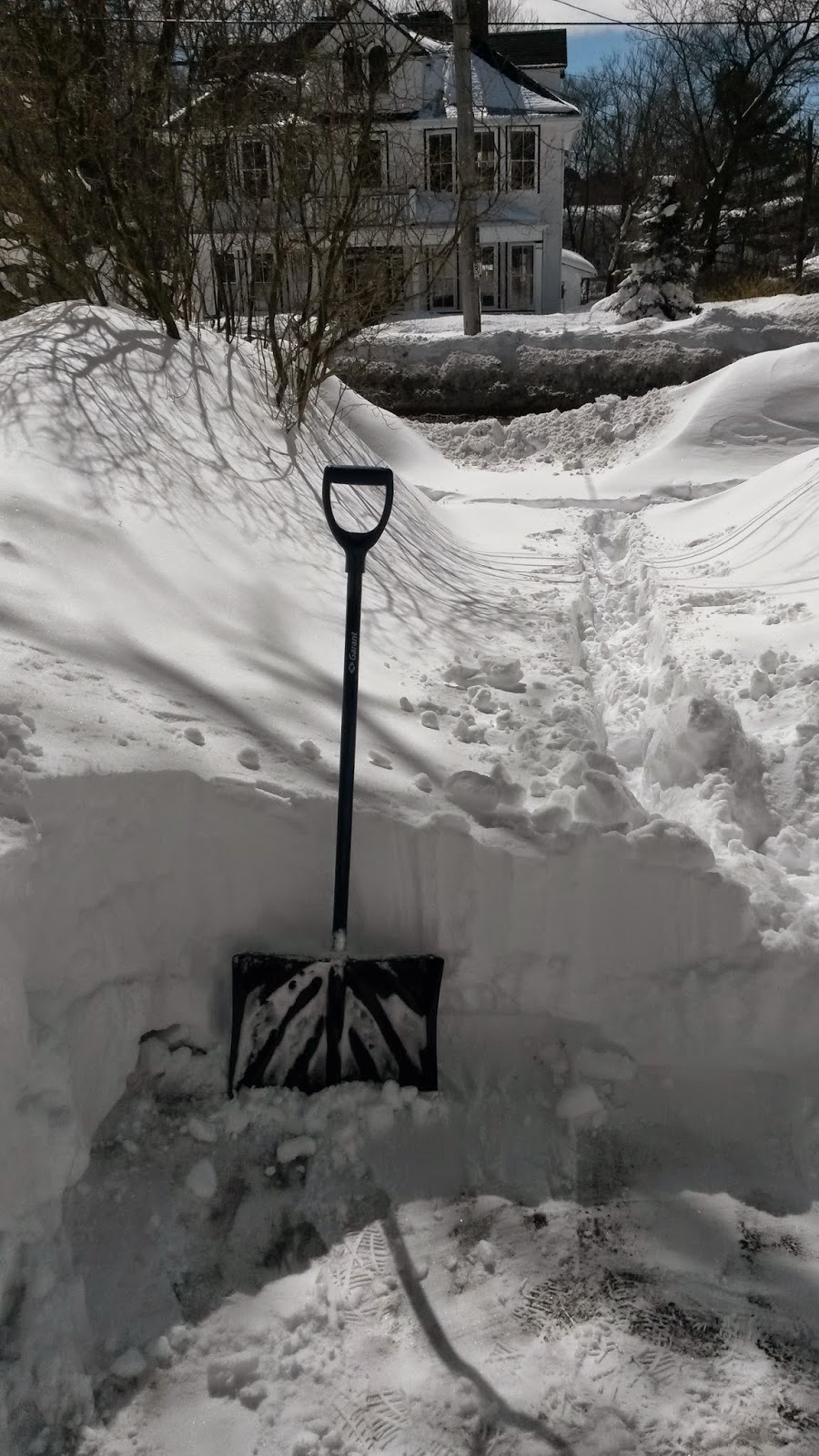 (With the shovel for a bit of perspective - almost done!) 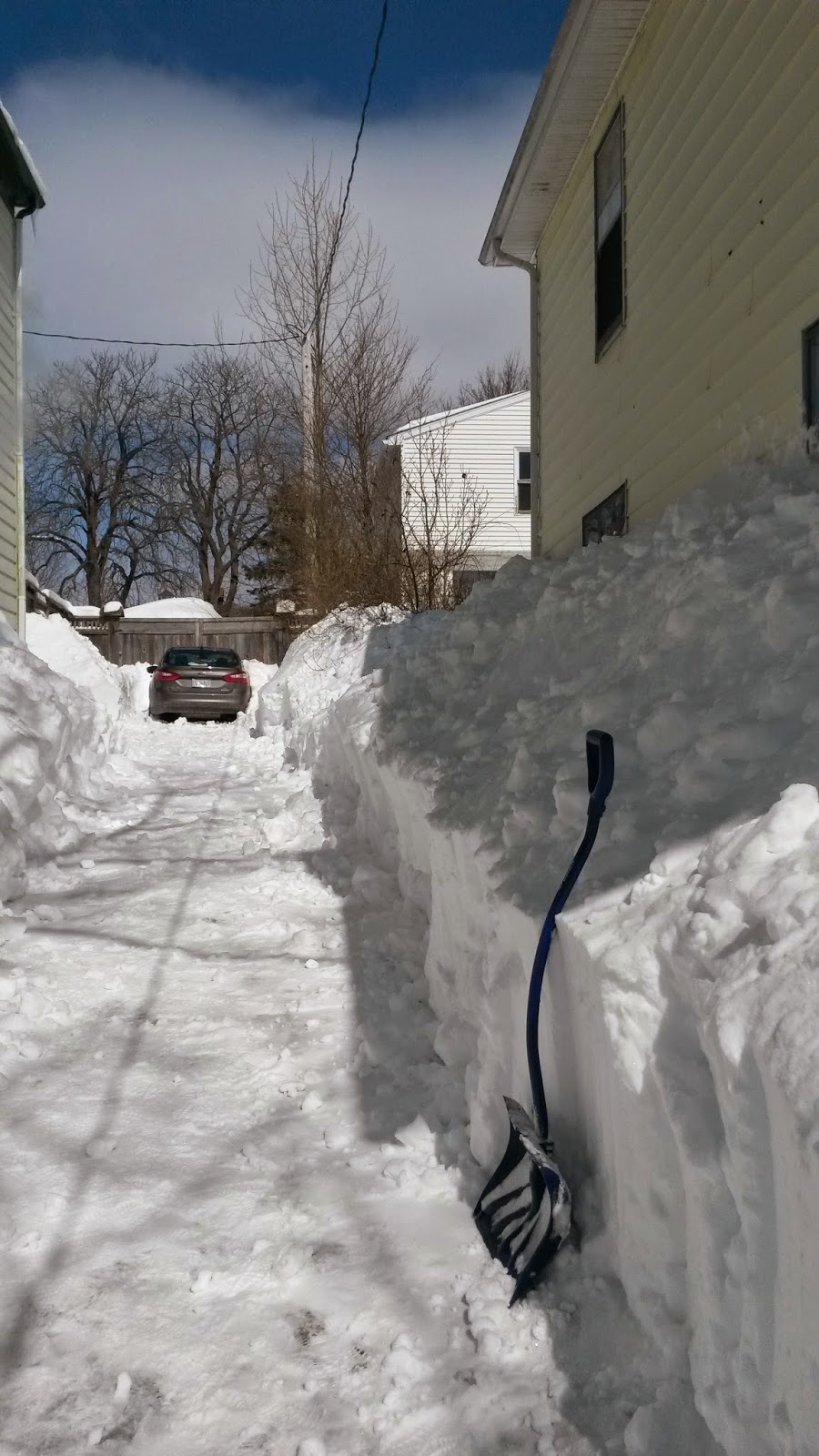 (Looking back up the driveway.  Like I said - running out of places to put the snow!)
Posted by Kate at 22:31 No comments:

One of my classes this term is Worship Foundations, where we explore different aspects of worship and how they all fit together.  And in this class, one of our assignments is to create an "Aesthetic Expression for Worship."  The assignment guidelines are very broad - it must be an original created for this class; it is to be an expression of faith; and it is to be something that can be used in a worship service.  Beyond that, the sky is the limit.  The assignment guidelines say that it could be a drama, video, musical score, paraments, banner, dance etc.  I know of students in previous years who have done wood carvings, created communion vessels, choreographed and performed a liturgical dance…

When I heard about this assignment, I knew right away what I was going to do.  About a year and a half ago, I came across a poem by Hildegarde of Bingen that spoke to my heart.  I copied it out so that I could carry it with me literally as well as figuratively, and I knew that I wanted to do something musical with it.  This course is giving me the excuse to spend the time turning this poem into a choral anthem.

It has been a fun process.  I have been learning how to use software to write out the score - anything I have written in the past has been just for me, and so it didn't matter if no one else could read my musical notation.  And in the process, I have discovered that this software not only produces a neater score than I could do myself, but it is also faster than writing out music by hand.

I have also been recruiting choir members, since I can't present this artistic expression by myself.  We are setting up choir practices over the next couple of weeks so that everyone can learn the music; which gives me a deadline of Monday to finish getting the music out of my head and in to the computer so that I can distribute it to my awesome choir members.  And then on March 24, we will be presenting to the rest of the class; and then on March 26 it will be included in the school chapel service for everyone.

A bit stressful, yes (this is my first attempt at writing choral music - I've stuck with piano or piano and voice in the past); but so much fun at the same time! 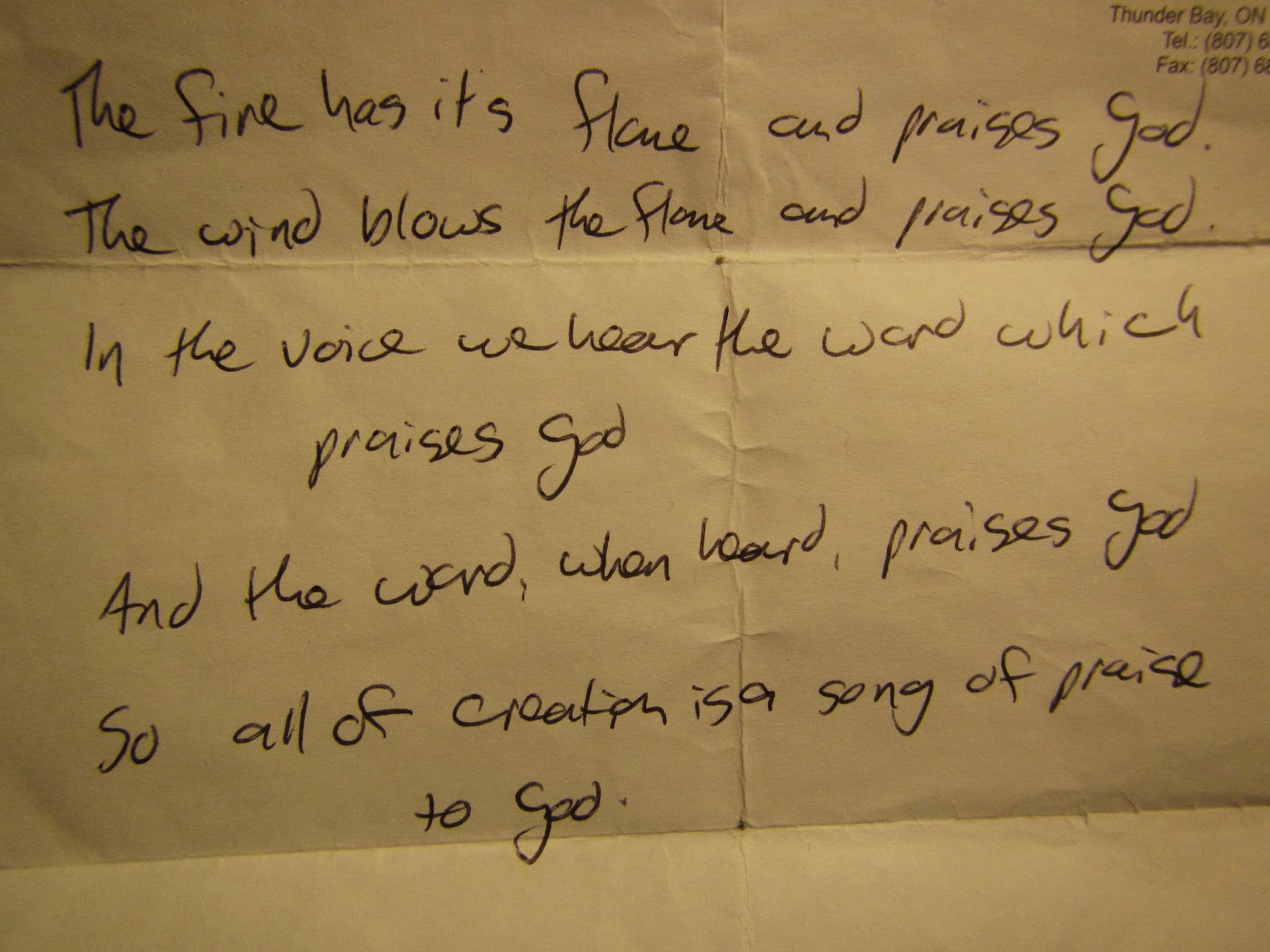 The poem, written out on the piece of paper that I have
carried with me for the past year and a half. 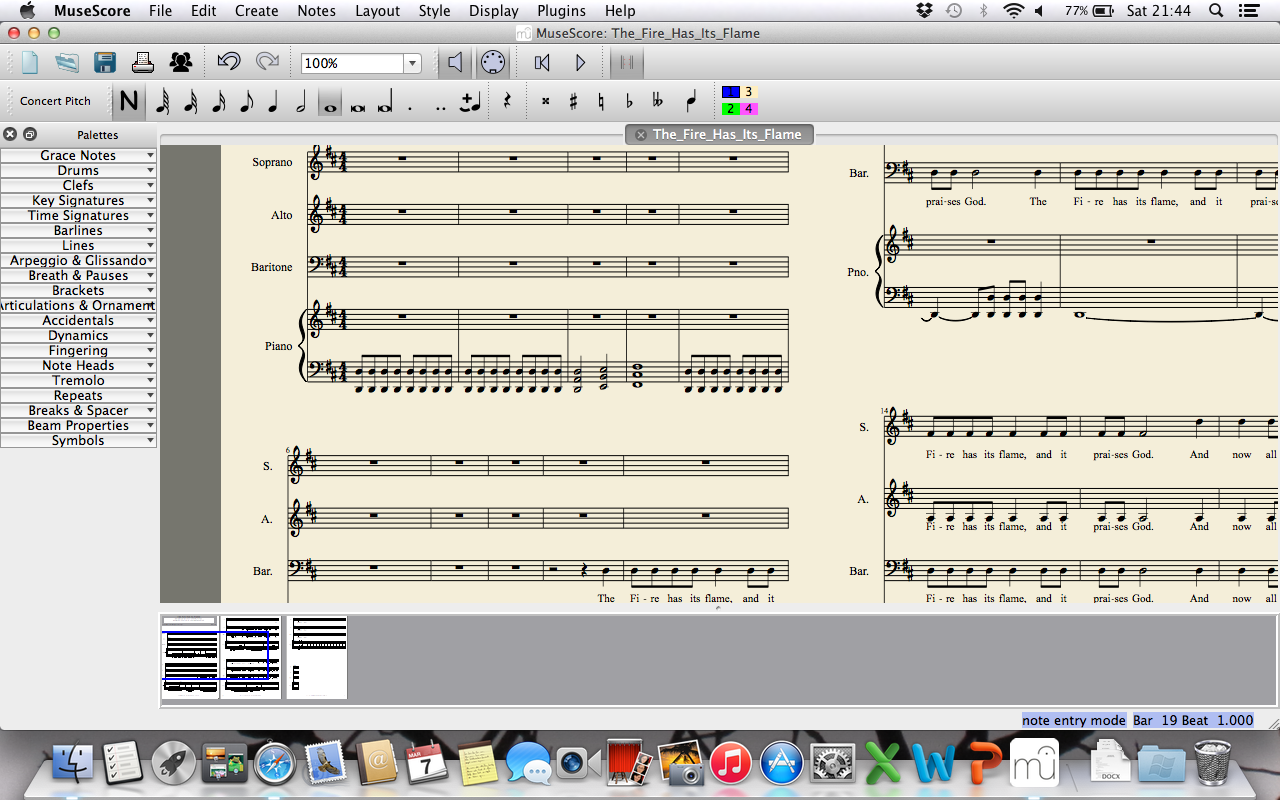 One thing that is new this term is that I am doing Supervised Field Education, or SFE.  This involves a part-time placement at a church, starting to learn and practice some of the practical skills of ministry.  We students meet together once a week in class with our professor who supervises us, and then we are expected to spend 6-10 hours per week at our site.  We meet weekly with our supervisor, attend worship services, and become involved in the life of the church.

We will spend a total of 3 terms at our learning site.  In this first term, there is no specific focus, but rather each one of us set four learning goals and we try to shape our experience and learning around those goals.  My goals are to gain knowledge and experience with the sacraments (baptism and communion); to learn about using visual images to enhance worship; to be comfortable defining my pastoral identity; and to have decreased anxiety related to pastoral care around bereavement and funeral planning.  Except for the last goal (no funerals at the church since I started), I've been working away at all of those goals with the help of the congregation and my supervisor.

Some of the fun stuff that I've been able to do since starting:

I'm lucky to be at a very busy and welcoming church - nobody has told me yet that I can't do anything, so I'm trying to get to know as many people as possible and see as much as I can (given that I'm not there full-time).  It is a much bigger than my home church, with a lot more programmes going on - I was a bit (or a lot) overwhelmed at first, but I'm starting to get a sense of how things work.
Posted by Kate at 20:43 2 comments: