Have you ever traveled to a place where you don’t speak or understand the language that is spoken?  It is a disconcerting experience to be surrounded by words and language and not to be able to understand a single thing that is being said, and to not be able to make yourself understood.

I remember when I first moved to Tanzania, where the national language is Swahili, we as volunteers were given two weeks of language training before being sent out to our placements – mostly to make sure that we wouldn’t starve or insult our neighbours too badly.  And two weeks later, there I was in rural Tanzania equipped with my introductory Swahili lessons, immersed in a rural community where I was surrounded not only by Swahili but also by the local tribal language of LuHaya.  I still remember those first few weeks – surrounded by words that I couldn’t make any sense of.  After a bit, I came to realize that if I was able to pick out an occasional word, the person was probably speaking Swahili, whereas if I couldn’t catch any words at all, the person was probably speaking LuHaya.

Six months in, we were offered two more weeks of intermediate language training where we learned the rest of the grammar; and it was probably somewhere between the year and a half and two year point that I really started to feel comfortable understanding and using the language.

And if I had left at that point in time, if I had succumbed to the confusion and walked away, if I had stopped engaging with people and insisted on speaking only English, then I still wouldn’t understand or speak Swahili.  It was only by plunging in to the confusion, living with the lack of understanding, embracing the chaos, that I was eventually able to understand.

Nicodemus, in this week’s scripture story, is also confused – he just doesn’t understand.  He is one of the Pharisees, a leader of the Jewish people.  This story takes place in Jerusalem.  Jesus and his disciples have come to Jerusalem to celebrate the Passover at the temple there; but while they are at the temple, Jesus has caused a bit of a commotion when he made a whip out of some cords, overturned the tables of the money changers, and drove the animals that were intended for sacrifice out of the temple.

So, as you can imagine, the temple leaders, including Nicodemus, probably weren’t very happy with Jesus at this point in time.  But Nicodemus seems to be curious about Jesus – curious enough that he comes to Jesus to ask some questions.   But he comes to the place where Jesus is staying at night-time, under the cover of darkness.  Maybe he doesn’t want his companions at the temple to see where he is going; or maybe the literal darkness outside represents the fact that Nicodemus is figuratively “in the dark” about who Jesus is.

He is curious though, and he opens the dialogue by praising Jesus – “Rabbi, Teacher, we know that you are a teacher who has come from God, for no one can do these signs that you do apart from the presence of God.”  Jesus replies with a statement that seems designed to confuse rather than clarify – “No one can see the kingdom of God without being born anew.”  And so Nicodemus, confused, asks Jesus to explain.  “How can anyone be born after having grown old?”

And Jesus again seems to confuse Nicodemus even more, instead of offering clarity – talking about being born of water and Spirit, and the wind or Spirit blowing where she chooses.  Finally, in verse 9 we hear Nicodemus for the last time, still confused, asking Jesus “How can these things be?”  And then our dialogue turns to a monologue with Jesus teaching about eternal life.  It is almost as if they are speaking two different languages, neither one being able to understand what the other is saying.

Nicodemus just fades out of the scene.  We don’t hear any more from him, we aren’t told whether or not he has left the room, we don’t know if he starts to understand what Jesus is saying or whether he is still confused – it almost feels like he slipped out the door while Jesus was still talking.

Now the primary focus of John’s gospel is discipleship.  If you flip ahead to the end of John’s gospel, you will read, “These are written so that you may come to believe that Jesus is the Messiah, the Son of God, and that through believing you may have life in his name.”  And so as you read the stories that the narrator is telling, it is always interesting to ask, “What does this story tell me about being a follower of Jesus?”

And on the surface, if I were to read this story of Nicodemus, I would probably have to say that he isn’t a follower of Jesus.  He comes to Jesus in secrecy, at night; he asks questions of Jesus; and then he just seems to slip away, back into the night, still in the dark.

But fortunately, this isn’t the last that we hear from Nicodemus in John’s gospel.  His story doesn’t end here.

If we were to flip ahead from Chapter 3 to the end of Chapter 7, Nicodemus makes another appearance.  The authorities are trying to figure out to do with Jesus, who keeps on kicking up a commotion and challenging the authority of those in charge.  They talk of arresting Jesus, but our friend Nick stands up for Jesus.  Nicodemus says, “Our law does not judge people without first giving them a hearing to find out what they are doing.”  Hmmm… Maybe what Jesus has been saying has had an influence on Nicodemus after all.

And we get to see Nicodemus one more time.  At the end of Chapter 19 of John’s gospel, after Jesus has been tortured, after Jesus has been crucified, after Jesus has died; Joseph of Arimathea asks permission to take his body away to be buried.  And when he does so, he is joined by another person – Nicodemus.  Nick shows up for Jesus in the end, bringing a hundred pounds of burial spices – myrrh and aloe – to help prepare Jesus’ body for burial.  Together, Joseph and Nicodemus wrap Jesus’ body along with the spices in linen cloths, and place it in a tomb in a garden.  There, at the very end, Nicodemus serves Jesus with love.

And so, in the end, it seems as though Nicodemus was able to wade through the chaos and confusion in order to become a follower of Jesus.  He was willing to take that first step into the shadowy chaos; he was willing to become even more confused, in order to reach clarity on the other side.

And so this week, I encourage you to be like Nicodemus.  Is there a faith step that you’ve been considering taking, but have been too afraid?  Do you feel yourself called by God to do something new or different, but that something seems too overwhelming and chaotic and scary?  I encourage you to take a page from Nicodemus’ book and step into the chaos.  Ask Jesus your questions.  Don’t be afraid of the confusion.

And trust that Jesus is there somewhere in the chaos, that Jesus hears your questions; and trust that the shadowy confusion will eventually clear until you find the clarity you’re looking for.

For God is everywhere, yes, in the places we expect, but especially in the surprising places, the unexpected places, the chaotic places.  And God is just waiting to welcome us home to love.

Thanks be to God. 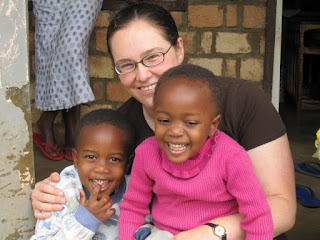 Some of the kids who struggled to make themselves understood
when I moved to Tanzania;
but a smile is a universal language!