"Turning Away from Fear" (sermon)

Has anyone else noticed that the world around us seems designed to make us afraid?  Fear seems to be so much a part of the world these days.  These can be global-scale fears like the fear of outsiders that seems to be infecting so many governments around the world; or the fear of the climate crisis that can paralyze people in to inaction.  These days, there is the fear of the new Corona Virus that is making people act in irrational ways, and discriminate against people who look like they or their ancestors maybe came from east Asia.  Or the fears can be smaller scale personal fears like the fear of being bullied, either in-person or online, or the fear of failing at a task that you want to try.

You can see fear used in advertising – a common strategy that advertisers use is to make you afraid of something, then promising that if you trust the person or the company advertising, then you don’t need to be afraid.  One ad that I’ve seen several times recently comes from FCNB – the Financial and Consumer Services Commission of New Brunswick.  And while this is a Crown Corporation that provides needed oversight to the financial sector, their current advertising campaign around preventing fraud is completely fear-based.

The first 2/3 of the commercial has no words as the camera moves through a family’s home; but the music and the slightly wonky filming give you the impression of being in a haunted house. Then the voice comes on to tell the viewer, “It’s scary, how many ways fraud and scams can enter your home.”  There – they’ve built their case by making the viewer afraid.  And then they offer the solution by directing you to their website.

You see the same strategy being used by political parties of all stripes and colours during an election campaign.  The party will choose an issue, whether it be the economy, the environment, national security, or something else, and they will make you afraid of that issue.  And then they will promise you that only their party is qualified to protect you from that fear.

Fear is a very powerful motivator.  Fear can make you act in ways that you wouldn’t normally act.  But do you really want to live your life being driven by your fears?

Last week at our annual meeting, we started exploring the book of Deuteronomy a bit, and I mentioned that this book is set right on the edge of the Promised Land.  The Israelite people had been wandering in the desert wilderness for 40 years, and they are about to cross over the Jordan River to enter in to the land that had been promised to them and to their ancestors.

Think back to the story of Joseph, and how Joseph and his brothers ended up in Egypt in a time of famine, and how they and their descendants stayed there.  And remember that eventually a new king, a new Pharaoh arose in Egypt, one who didn’t know Joseph or remember how Joseph had helped the Egyptians; and as a result of this new king, the Israelite people ended up as slaves in the land of Egypt.

Remember how eventually Moses went to the Pharaoh and demanded that he let the people go; remember how God worked through Moses to part the waters of the Red Sea so that the people could cross over to safety on the other side; remember how Moses climbed to the top of Mount Sinai and God gave to him the Ten Commandments along with the rest of the law.  And then the people set out to cross the desert to the Promised Land.

Then we come to the part of the story that we don’t hear very often.  It doesn’t actually take 40 years to cross the Sinai Peninsula to get from Egypt to the Jordan River, even if you’re traveling on foot.  It took the people three months to get from Pharaoh’s palace to Mt. Sinai, and then they camped out there for a year or so.  And then as they left the camp there, Moses sent 12 people ahead of the group, one from each of the 12 tribes, to scout out this land that God had promised to them.

When they were re-united, these scouts told them that yes, it was a beautiful and fertile land on the other side of the River, but that there were people living there who must be descended from giants, and it was much to scary a land to move to.  And so rather than trusting in God and crossing over the river into the land that God had promised to them, the people listened to their fear and turned away.  They turned back in to the desert.  Because of their fear, they spent the next 38 ½ years wandering through the desert wilderness.

And while they were there, they had to learn to trust God rather than listening to their fears.  God was visibly present with them in the wilderness, leading them as a pillar of smoke in the daytime and by a pillar of fire at night.  God fed them with manna and quails, even though there was no food to be found elsewhere.  God made water flow out of a rock so that they didn’t die of dehydration.  And slowly, slowly, the people learned to trust God – they learned to put their faith in God.

And 38 ½ years later, they once again return to the edge of the Jordan River.  And this is the setting of the book of Deuteronomy.

The book begins with Moses recalling and recounting their journey so far; but then the majority of the book is God speaking through Moses, reminding the people of the law that they had received 39 years ago at Mount Sinai.  As I mentioned last week, there are lots of “Do these things” and “Don’t do those things” here.  Some of them make sense, but others don’t fit with our current context.  When I was at AST, I took a semester-long course on Deuteronomy, and I remember the professor beginning the first class by saying that if we got to the end of the semester thinking that maybe stoning people wasn’t as bad as we thought it was, then she hadn’t done her job properly!

But then we get to the end of the book, to the verses that Pat read for us today.  God is pleading with the people to remember God and to continue to place their trust in God after they cross over the river into the Promised Land.

God says to the people, “See, I have set before you today life and prosperity, death and adversity.”  God is reminding the people that when they turned away from God last time, when they didn’t trust that God was with them and wanted the best for them, they ended up spending 40 years in the desert, and a whole generation passed away.  God is pleading with the people to choose life this time, to not be lead by their fears and insecurities because for them, that choice literally led to death and adversity.

God pleads with the people to choose love and to choose life; and I think that God continues to plead with us today.

When we are tempted to listen to the voice of fear that tells us that we should be afraid of and shun the person with skin colour that may indicate that they came from the part of the world where a new virus is emerging, God pleads with us to listen to God’s voice instead and choose life-giving love.

When we are tempted to listen to the voice of fear that tells us that the world is falling into chaos, God pleads with us to choose life and to choose love and to trust that God’s love is stronger than our fears.

When we are tempted to listen to the voice of fear that tries to tell us to put our trust in humans and in human institutions, God pleads with us to choose life and to choose love by placing our trust in God instead.

For love is stronger than all of our fears, and God is with us.  God goes before us even as we enter a new land and a new way of being; God travels beside us as a companion on the journey; and God is always within us, closer to us than our very breath, guiding us and drawing us in to the dance of love that is God.

Thanks be to this life-giving God of love.  Amen. 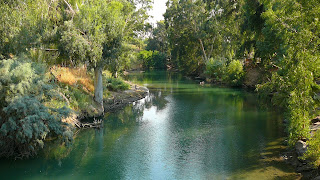 The Jordan River - one side wilderness, the other side Promised Land
(picture from Flickr - CC BY-NC-ND 2.0)