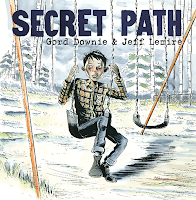 This is another re-telling of the story of Chanie Wenjack.  I was curious about why this album / graphic novel combination was released so close to Joseph Boyden's book telling the same story.  It turns out that it isn't coincidental - Joseph Boyden wrote an article for MacLeans explaining how Gord Downie's brother came across an article about the death of Chanie Wenjack written when he had died, and several artists decided to release works about the story this fall, corresponding with the 50th anniversary of Chanie's death.  They decided that the impact of multiple works released at the same time would be more significant than releasing them individually.

Secret Path, as a book, contains very few words.  Chanie Wenjack's story is outlined in a few short paragraphs on the back of the book, but the book itself contains only the lyrics of the 10 songs on Gord Downie's album of the same name, poignantly illustrated by Jeff Lemire.  The book comes with a code so that the album can be downloaded and listened to along with the book.

The illustrations are beautiful and heart-breaking.  I am a fan of Jeff Lemire's work (see my review of Essex County), and his style of illustration is well-matched to the story being told.  The pictures tell the story - they convey the cold and the loneliness and the longing for home without the need for words beyond the song lyrics.  My one quibble with the illustrations is minor - Cecilia Jeffrey Indian Residential School that Chanie attended was run by the Presbyterian Church, yet Chanie is depicted as interacting with nuns.  I know that is minor, and if I hadn't lived in Kenora for a bit, I probably wouldn't have known to notice; and I will grant the illustrator artistic licence, since all of the major denominations did run residential schools in Canada.

I was talking to one of my professors on Friday about the story of Chanie Wenjack, and he mentioned that it is a story about attachment.  That comes across clearly in both this book and in Boyden's Wenjack.  In this book, it is the visual portrayal of Chanie's father appearing throughout the pages, drawing him homeward; while in Wenjack, it is Chanie holding on to his language, and continually recalling his family members.

The endings of the story are different.  In my review of Wenjack, I spoke of the starkness of the ending and the only hope coming from the public inquiry that came out of his death.  This book shows Chanie being re-united with his family after his death, and it came as a bit of a let-down since I read it after Wenjack.  There is nothing beautiful about the death of an 11-year old boy from exposure as he is trying to return home, and I felt a bit betrayed by the attempt to give Chanie a happy ending.  I can see why they chose to do it this way, but the ending of Wenjack was more powerful and thought-provoking.

The two books together, Wenjack and Secret Path, make good companion books.  One story, with two different perspectives.  As I said before, this is a story that Canada needs to know, and the more different ways the story can be told, the better.

I've downloaded the album, and will spend some time over the holidays listening to this third telling of the story.